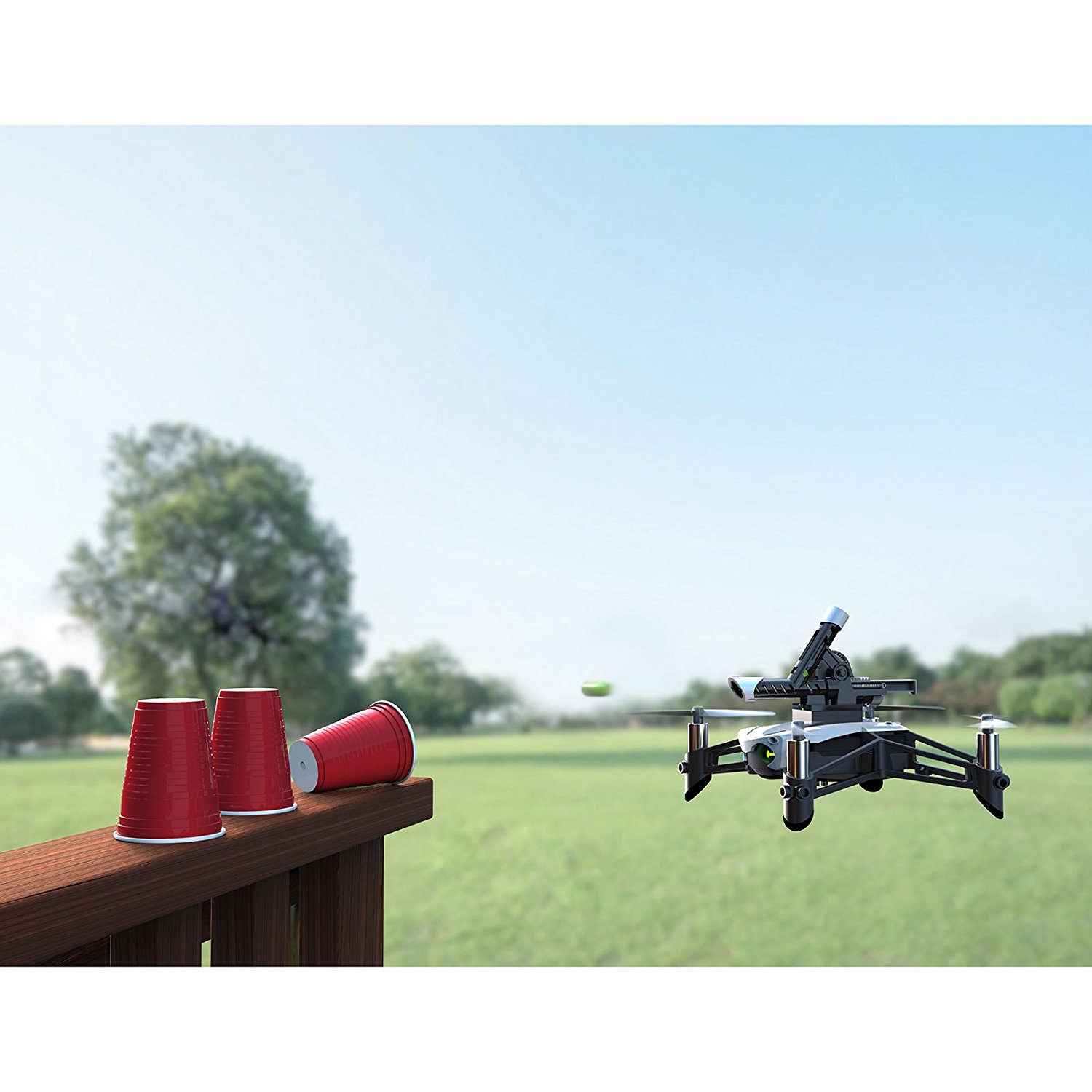 When it comes to drones, the Parrot Mambo is really tiny – can you believe that it fits squarely into the palm of your hand! Indeed, it is only 15 cm square and weighs only 63 g. If you’re new to the world of drones, you will love the Parrot Mambo because it’s fun and ideal for beginners. With Christmas looming around the corner, it is probably safe to say that this cute tiny critter will end up in some lucky person’s Christmas stocking.

You probably are asking the question – can such a tiny little drone have a camera? And yes, it does. It also comes with a FPV headset. It might be little, but it’s packed with punch and is an entry level drone for drone-racing.

Some pros and other features to know about:

Is there a “negative” to the Mambo?

One down feature about it is has a short battery life. It’s a small little device, the Mambo, so it makes sense that the battery isn’t going to last all that long. Even the popular drones like the DJI Phantom 3 only have about 25 minutes of battery life. The Mambo’s instruction booklet does lay claim that the battery lasts for about 15 minutes, but it’s really more like 9 minutes or so. Charging the battery can also take a while.

It’s cute and tiny, but it’s no toy

Seeing as Parrot is a big name in the drone world, you can always know that you are getting quality. If you break the blades for instance on your little drone, they are always replaceable.

Whilst we’re on the topic of Christmas or gifts, this gorgeous little drone is not actually being marketed by as a child’s toy. It might look like one, certainly will appeal to a child with the cute design. The games console and the plastic transformer-y design are appealing to a child with the green LED-eyes that stare at you from the white chassis that looks almost like its eyebrows! It also has four little plastic legs or limbs that branch out. And there are rotor-blades attached. But the minimum age for this drone says clearly on the box that it is not for children under the age of 14. It needs proper correct handling.

Some think it’s probably fragile because it’s made out of plastic and also probably because it’s got that toy-appeal look. When you check the price, you do a double-take to check. But it’s because it is tough, it can take quite a beating and still keep going. So you’re paying for that, and you’re also paying for the fantastic technology. You also get the controller that has been included and the popular FPV headset. One can see clearly that it is not overpriced at all.

Check out what your little drone comprises

Ready, get steady and go!

♦ To launch your Mambo, you will either press the take-off button or throw it as mentioned above, watching it hovering in the air. You can then press the fire button with the attached cannon on, firing the little pellets.

♦ You can fly your Parrot Mambo with the FlyPad without the need of your smartphone. For other airborne drones, smartphones are required along with the FlyPad if you are flying mini drones. You need to note that the app for flying the Parrot Mambo is called FreeFlight Mini; it does not exist for Windows phone.

♦ Look out for the great “free fall” take-off feature. This allows you to throw your little Mambo into the air without pushing the take-off button on your app. It’s handy when you are not near a flat surface to take off from.

♣ The Parrot Mambo is indeed a pleasurable fun drone. Because Parrot is a leader in drone-technology, they work expertly on their software and hardware to achieve the higher end range of drone models and which filters down to their less expensive models.

♣ Easy mode flying allows the drone to be stabilized vertically and horizontally to give you good control.

♣ Drift mode: In this mode, the horizontal stabilization is disabled, allowing you to get better control over your drone

♣ Racing mode: In this mode the autopilot is completely off, and you are in complete control.

♣ Your top Parrot Mambo speed will be 30 km or 18 miles/hour. You will find it zippy and agile, prepared to do aerial stunts that will delight. If you are looking for precision control, you can. When you buy your Mambo, you can also order the Parrot FlyPad. Without the controller, this drone can fly with the mini app (FreeFlight) from your smartphone.

♣ It all depends on you if you want to use the Parrots FreeFlight smartphone app, or the controller. The controller is included in the box. Both these methods are easy to use. The range over which you control the drone is better actually when you use the FlyPad controller. You get around 60 meters flying distance with the controller and about 40 meters with your phone.

Yes, it sure is a whole lot of fun, you won’t’ regret getting it.  Getting excited about it, you might be saying – can I find something like it for even cheaper? Probably, but there will be some limitations.

For instance, there is Parrot’s own Parrot Airborne Cargo drone. It’s practically the same as the Mambo but it doesn’t come with the canon and the grabber. It’s got some other compartments for bombing and smuggling runs, and it’s probably about $50 cheaper.  In other makes, you probably won’t get those fun accessories that come with the Mambo and you might need to cough up more money for a remote control and the batteries. Remember the Mambo is a Parrot name, a very noted name in the world of drones. It’s fantastic for someone who has started a new hobby. The Mambo is idea for getting started, before moving on to other drones once the addiction hits. But it is guaranteed, you will have a blast with it.

As mentioned above, Mambo’s real selling point is the flying with the FPV. It’s the fun aspect. The tiny camera on this drone isn’t going to give you sharp, clear oh-my-word! videos and photos. This isn’t the drone for that. It’s that exhilarating experience when you have the headset on, and you are weaving your way between obstacles. With the FPV facility, the Parrot Mambo moves from kind of novelty drone to something to think about in the drone world. And remember, it might look cheap, but get going with your little Parrot Mambo and you will soon realise where your money went. It’s the perfect choice for checking out drone racing without the need to buy the more dedicated devices that wouldn’t be able to do much else. And if drone racing doesn’t appeal to you, take off the camera – what you’ve got left is still one mean little machine. Better get that letter off to Santa soon!

Yuneec Breeze: The Flying Selfie-Stick and A Drone of the future