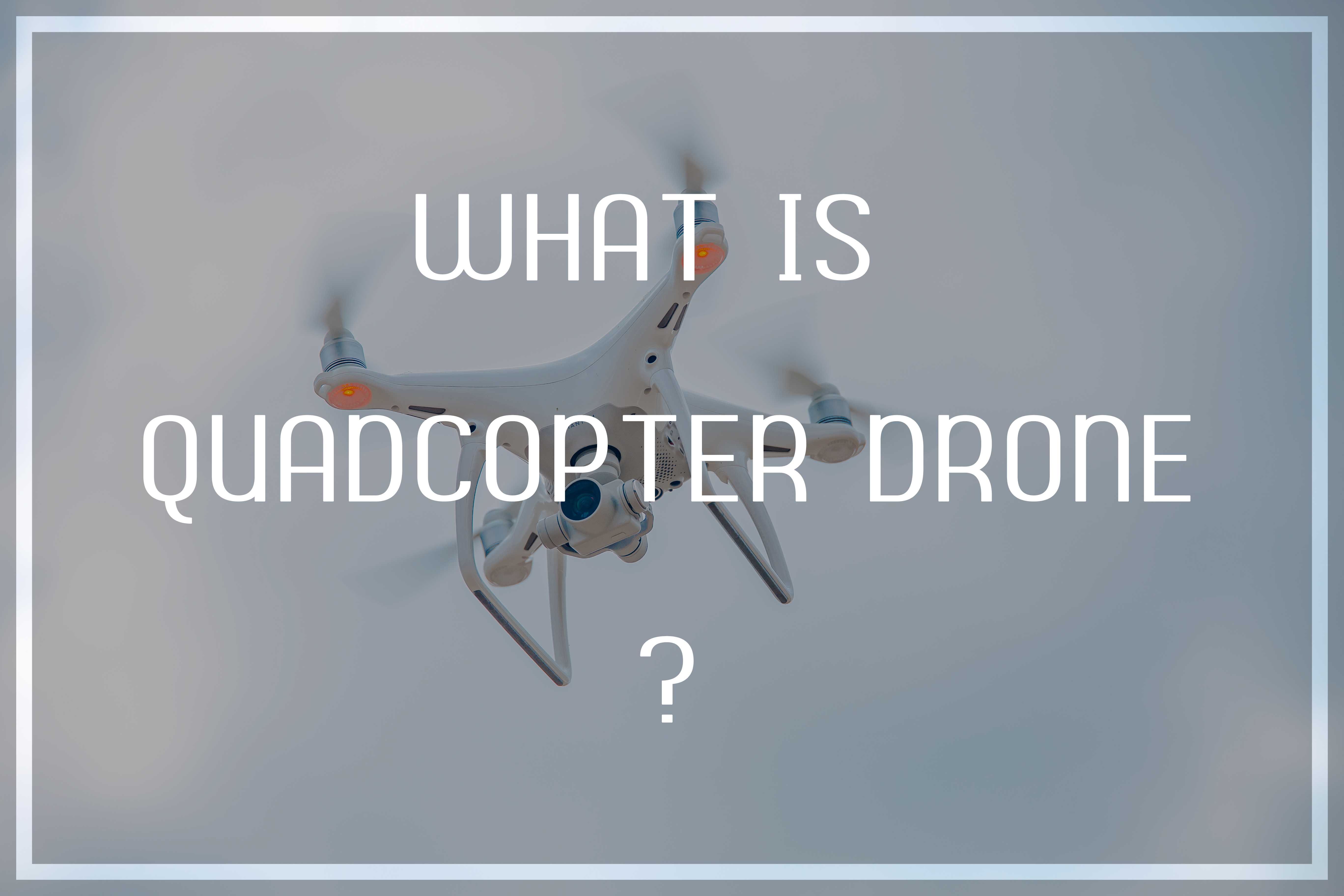 Thanks to advancement in technology, there is a wide array of drones in the market. All you need to do is compare and contrast the specifications to choose one that best suits your needs and preferences. Luckily, you do not have to do all the homework yourself, as there are websites that are dedicated to providing quality and accurate information about the drones to help you make an informed decision.

Today, we will discuss the quadcopter drones. What are they? How do they function? And what are the benefits compared to other drone types in the market.

What Is Quadcopter Drone?

First, a quadcopter drone is also referred to as a quadrotor, multirotor, or simply a flying mechanical vehicle that is fitted with four arms. In a bid to facilitate easy movement, each arm has its own dedicated motor that is strategically attached to the propeller.

Due to the shape and functionalism of the arms and motor, quadcopters are considered relatively unstable in terms of their aerodynamics. You will need to have a robust flight computer to convey the commands that change the RPMs of the four propellers so as to move the drone in the desired direction.

One of the main differences between a helicopter and a quadcopter is the manner in which the latter controls movement and lift force. Helicopter lift is achieved by the wings while the quadcopter relies on its propellers. It is also important to note that the helicopter uses its main rotor to achieve the desired lift. It also has the ability to change the pitch of the rotor blades in order to generate different control forces.

Contrary to popular belief, the concept used to develop quadcopters is not new. Back in 1920s, engineers managed to develop manned quadcopters for military missions. The main challenge that they faced was bad performance, high degree of instability especially when the quadcopters were in motion, and the pilot had to control it fully.

New innovations in the electronic technology has led to development of brushless motors also referred as coreless motors, flight control computers, accelerometers, advanced GPS systems, small but very efficient microprocessors, and other advanced accessories that make the new generation quadcopter drones more efficient and reliable. They are widely used in both video and photography industries due to their advanced ability to take clear and articulate pictures from above.

To fly a quadcopter drone, you need to have a deep understand of how the various parts function. Let us look at the main areas of this unique drone.

Quadcopter is shipped with a 4-channel controller that is programmed to send commands to the drone. The commands can be used to change its pitch, roll, yaw, and throttle in seconds. To achieve this goal, most of the controllers in the market rely on 2.4 GHZ communication frequency. In fact, most WiFi connections across the globe rely on this frequency.

In addition, the controller has four trim buttons that are strategically located to help you adjust the drone flight behavior quickly and accurately. For example, if you notice that the done is drifting in a particular direction, you can revise that by applying trim for the specific control input to remove the drift.

The 2 sets of propellers

As mentioned earlier, a quadcopter drone is fitted with two sets of propellers and two set of motors. The two components are designed to rotate in opposite directions thus giving the drone the lift and drift it needs to move in different directions when airborne. It is also important to note that each set of propellers has a varying pitch and so if you happen to change the propellers, you will notice that they will start to blow air upwards instead of downwards. The downward force will result in the drone flipping and not flying in the desired direction.

Based on this fact, it is wise to mark the motors and propellers if you happen to detach them from the drone’s frame for maintenance and repair. However, most propellers have marks that indicate which sets of motors should be attached to it.

The movement of your quadcopter drone is dependent on 4 primary forces namely:

Lift: This is the upward reaction force that gives the drone the ability to remain airborne and it is produced by the propellers.

Thrust: Thrust is basically the horizontal reaction force that is also produced by the two sets of propellers.

Drag: Drag is the backward force on the drone due to the air resistance as it moves. To give you a clear perspective of this force, imagine the feeling that you get when you put your hand outside a car window when it’s in motion.

Gravity: This is the force that tends to pull the quadcopter down towards the earth due to its weight and mass.

If you are to succeed in flying a quadcopter drone, you have to master the art of managing these three forces in different environments. Note that weather conditions have a significant impact on movement of the drone.

A similar change in RPMs in both sets of propellers takes place when you move the drone sideways. The only difference is that now, the right and left propellers get involved when the drone is moving sideways. For example, if you want the drone to move in the left direction, point the lift force slightly to the left by increasing the RPM on the right side and reducing the RPM on the left side. The same action takes place when you move the drone to the right side.

Hovering movement is achieved when the upward lift balances the gravity force, which, as mentioned earlier is responsible for pulling the drone downwards due to its mass and weight. If you want to increase the elevation of the drone, the lift force has to surpass the force of gravity. This is achieved by increasing RPMs on all the four propellers.

The direction in which your quadcopter drone flies or moves is dependent on the RPMS of each set of propellers. Each movement of the stick on the controller needs to be interpreted correctly and converted into the right commands directed to each of the motors attached to the drone. It is not possible to achieve this without a flight control system that is programmed to work perfectly with the drone.

Concisely, the main role of the flight control system or computer is to facilitate coordination of the four propellers. The system is also wired to connect seamlessly to other sensors and devices that help to control movement of the drone. For example, it is directly connected to the remote control receiver that is in turn connected to the remote transmitter. This connection ensures that commands are received and acted upon promptly thereby preventing the drone from crashing or falling off the sky.

The most advanced quadcopter drones is fitted with a new generation transmitter that facilitates two-way communication with the flight controller. Other additional accessories in advanced quadcopters are gyrocompass, barometer, and GPS.

Unlike the drag force, it is not easy to visualize yaw maneuvers. Have you ever wondered why a helicopter has a tail rotor? The main purpose of this rotor is to prevent the helicopter’s body from rotating. If the helicopter blades were to start rotating anti-clockwise, the fuselage will automatically start to rotate in the clockwise direction due to the torque reaction as explained by Newton’s Third Law of Dynamics.

Concisely, the tail rotor helps to balance the torque reaction thus preventing fuselage due to the helicopter’s rotation movement. Now, let us analyze the quadcopter drone movement. If the two sets of propellers were to rotate in the same direction, the quadcopter body is forced to rotate in the opposite direction. However, this does not happen because two of the propellers are set to move in anti-clockwise direction while the remaining two rotates clockwise. As a result, one set proposes a torque in one direction while the other proposes a torque in the opposite direction. The two forces cancel out or balance out thereby preventing the drone from rotating.

When you want to do a yaw maneuver, the quadcopter drone has to rotate. This movement is achieved by reducing the RPM on one set of the rotors and increasing the RPM on the other rotors. Due to the net torque in one specific direction, the quadcopter body is triggered to rotate. If you want to achieve an opposite direction, all you need to do is reverse the RMPs on the propellers. It is also important to note that the direction of any yaw maneuver is managed by the left stick on your drone’s controller.

Now that you know what a quadcopter drone is, how it functions, and how to fly one like a professional, let us shift gears and look at some tips to help you get maximum utility from your drone.

Familiarize yourself with FA guidelines

Excited about your new quadcopter drone -We know you cannot wait to take your drone outdoors and fly it, but before you do that, it is important to take time to read and understand the FA guidelines. The guide has a set of rules and regulations that you need to adhere to at all times lest you end up with a lawsuit. Some of the tips you will find in the guide include avoid urban and highly populated areas, flying at least 5 miles away from airports, and you should never try to fly the drone more than 400 feet high.

Take time to learn and master how the various controls work to avoid crashing your drone or overworking some of its components. Note that different brands have varying controls and so it is recommended to check the user’s guide provided by the manufacturer.

This is especially important if this is your first time trying to fly a drone. The prop guards can be fitted on the drone to prevent damaging the drone if it accidentally hits a wall or a tree. An extra propeller will come in handy especially if you happen to break one when learning how to operate the drone. Be sure to check if the prop guards and propellers are compatible with your drone before placing your order to avoid regrets down the road.

A comprehensive pre-flight check before trying out the drone will help you to get the best experience and promote the efficiency of the drone. Some of the things that you should check include:

Flying and maintaining a quadcopter drone is not difficult if you know how to control it well. Be sure to purchase it from an accredited supplier or online store to get value for your money. More importantly, make sure that you only install original parts in case any parts are damaged as counterfeit parts could compromise the efficiency and durability of your drone.