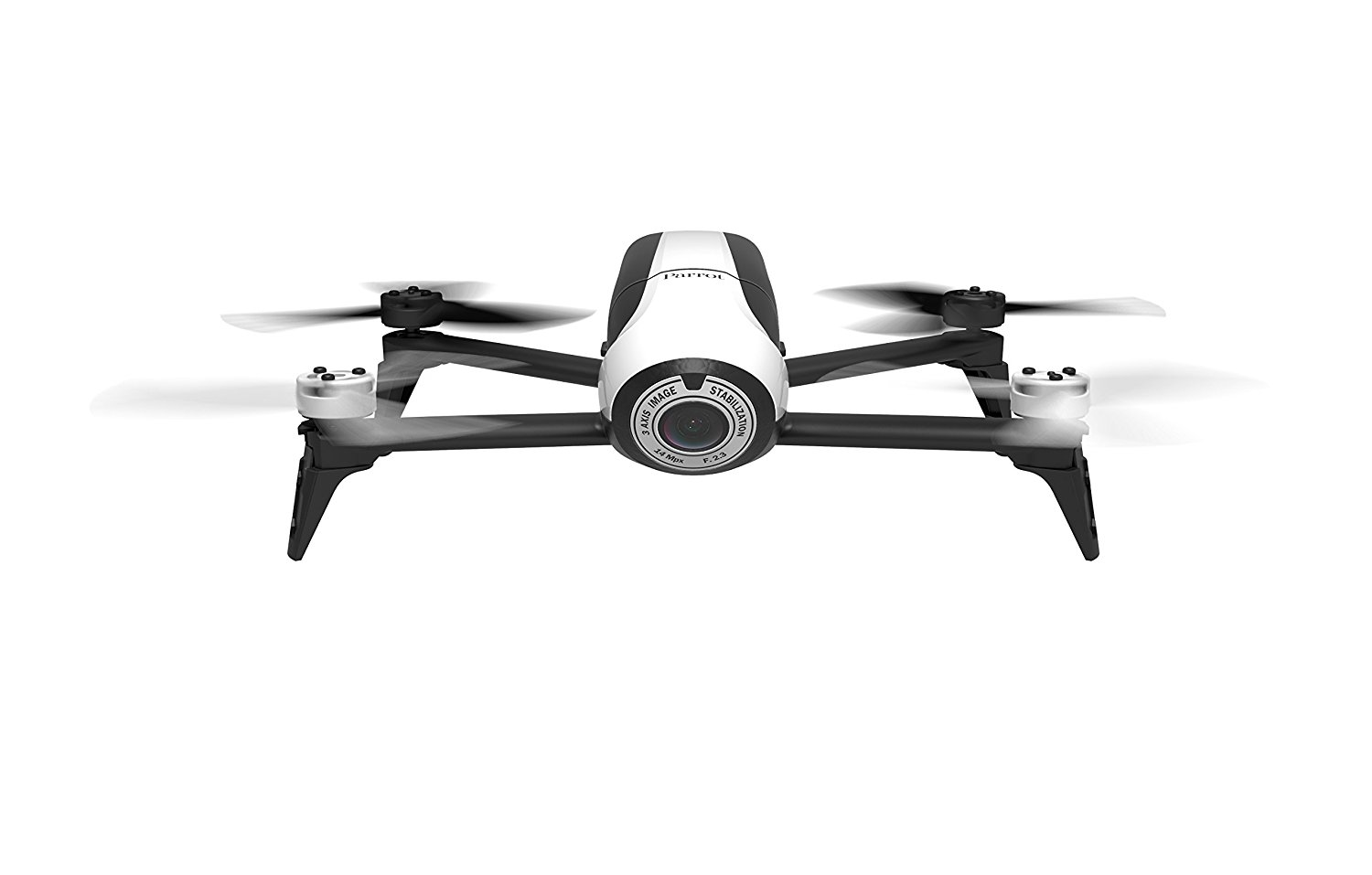 The Parrot Bebop 2 is a freshly designed smart-phone controlled drone that features 14 megapixels, ultra-modern camera capable of delivering a maximum of 1080p video recordings. As the second drone released from drone manufacturers, Parrot, the Bebop 2 has been contrived with user-serviceable motor rotors and a fish-eye lens that delivers a judder-free image. The unique selling point of the Parrot Bebop 2 is the optional FPV pack that features a professional style controller complete with buttons and sticks, together with a cockpit gear. By using the FPV pack, the user gets a first-person view of the drone’s recording, which happens to be a rather immersive user experience.

Despite the fact that the Bebop 2 resembles its predecessor in almost all aspects, the newly released Bebop 2 comes with a larger battery capacity and a more robust design. By increasing the battery capacity and the robust design, the company has come forth and addressed the two major shortcomings of their first design. The entire body has been designed using plastic except on the camera, deformable polystyrene type of material has been used. Instead of having one single unit, Bebop’s design features two main units, which are connected by a series of rubber balls. Bebop’s main body unit, which houses both the electronics and the camera, sit on top of the shock absorbing rubber balls and in turn minimize the vibration impact on the Bebop’s camera.

Due to this unique design, the Bebop might feel a little bit flimsy on the hand. However, this novelty means that the camera is less prone to turbulent weather and the great shake of the rotors. The bebop’s plastic rotors are detachable and in, turn to be fitted using a special tool to the drone. Before fitting the rotors, it is important to note that Parrot color-coded the rotors such that white is for the front rotors, while black is for the back rotors. In the box, spare rotors have been included and can be ordered online at affordable rates. The motor rotors are extremely powerful, such that they can ensure the drone holds its position irrespective of the strengths of prevailing winds. The drone’s landing and take-off are quite smooth.

Parrot has also included an additional feature, which allows the drone to switch off in case the performance of the drone is affected by external factors, i.e., the rotors are caught by grass. If this happens, then the drone will automatically switch off, and the user will receive an error message. It is important to note that a majority of the drones within the 500USD price range, lack this feature.

Unlike many drones, which normally come with their customized controllers, the parrot Bebop 2 does not come with a customized controller. Instead, the Bebop 2 is controlled using the company’s FreeFlight Pro application that is readily available on both Android and iOS platforms. The Parrot Bebop connects to the user’s handset device via Wi-Fi. Once the drone is successfully connected, a set of controls will immediately appear on the touchscreen. Either, users can decide to use a twin-stick set-up to control the drone or alternatively they can opt for the autonomous feature, which allows the Parrot Bebop to follow a specific path. The autonomous feature allows users to create a specific flight plan that the drone will strictly follow. However, the follow me functionality and other autonomous features are going to cost users a few extra dollars to unlock.

The FreeFlight Pro application toggles between a Wi-Fi signal that ranges between 2.4 GHz and 5 GHz. This, in turn, ensures that the Parrot Bebop 2 is always under the user’s control at all times. Nonetheless, if the Wi-Fi signal drops below the recommended strengths, then the drone will remain suspended until it is reconnected to the device once again. According to Parrot, the working range of the Parrot Bebop 2 is 300 meters. For users who do not mind flying the drone beyond their visual ranges, then it is important to note that with the Parrot 2 Sky controller, users can increase the drone’s operational range to 1.24 miles, all thanks to the Parrot Bebop 2 built-in wireless antenna.

Horizontally, the Bebop 2 can attain speeds of up to 37.28 miles per hour and 13.05 miles per hour vertically. All these speeds can be attained without necessarily affecting the drone’s picture quality. The battery has the ability to offer up to 25 minutes of flight time; however, users can expect flight time of not less than 20 minutes.

The < rel=”nofollow”a href=”https://www.amazon.com/Parrot-Bebop-2-Drone-White/dp/B0179JFAW2″>Parrot Bebop 2 has been engineered with a 14 megapixels camera, which spots a state of the art fisheye lens capable of delivering a 170-degree field of vision. This, in turn, means that the Parrot Bebop 2 delivers a much smoother video recording when compared to any other drone. With the assistance of software, the camera not only keeps the image steady but also it can anticipate sudden movements. When the Parrot Bebop 2 performs a U-turn, the software moves the camera’s focus to compensate the movement, and in the process resulting in silky smooth video footages. Despite the fact that video is captured at an outstanding 1080p/30fps, the Parrot Bebop could have done the drone some justice by factoring in a 4k recording. Nonetheless, the video quality delivered by the Bebop is still unrivaled.

The standard Parrot Bebop 2 model can be controlled using the Freeflight Pro mobile application and the user’s smartphone. However, an additional FPV package is also available for an additional fee. The FPV package features a SkyController 2 that includes physical controls like mini-joysticks, and Cockpit Glasses headsets. Just like Samsung’s VR headset, Bebop 2 does not come with an internal screen but instead makes use of the mobile device, to display the drone’s real-time footage. Nonetheless, when flying the drone, users will constantly be forced to look down at their smartphones to see the drone’s view. Many at times, this can prove to be a challenge, especially when the drone heis facing the user or when the controls are reversed.

The FPV solution eliminates this challenge, since the user will constantly be looking at the drone’s viewpoint, and thus users do not have to switch constantly their attention from their phone to the Bebop 2 drone. The first sky controller came with a more hulking build, which featured an optional neck strap, and two main handles that are used to hold it in place. SkyController 2 is not, only half the size but also feels much more like a PlayStation controller. The tablet/smartphone holder is detachable while the Wi-Fi antenna is somehow smaller.

2.    Comes with a fisheye lens and a vibration dampening design, which is a novel feature for the Bebop 2.

5.    Longer flight time of up to 25 minutes-Having a flight time of more than 25 minutes, allows the user to capture numerous photos and videos before charging the drone or swapping the batteries.

6.    An additional FPV kit-The extra kit takes the Bebop to a new level. At first, seeing what the drone sees is a strange sensation, however, after the first instance, it becomes extremely hard for the user to fly the drone without making use of the kit.

1.    The camera lens is susceptible to severe flair

How Long Will the Parrot Bebop 2 Last?

One of the outstanding features of the Parrot Bebop 2 is its reparability and availability of spare parts. The Bebop 2 package comes with two spare propellers that users can readily make use of in case the drone’s propellers are damaged. Furthermore, the spare parts and repair kits can be purchased from Parrot at affordable rates. Nonetheless, as expected, crashes will eventually take their toll on the drone.

In the quadcopter arena, the Parrot Bebop 2 has some extremely stiff competition. The Mavic Pro is a similar sized drone, which is not only small but also has a lightweight build and a 4K camera. Another alternative is the Typhoon H, a hexacopter which features folding landing gears and capable of delivering unobstructed 4K images. If you are looking for a similar FPV experience with a new twist, then you can purchase the Disco fixed-wing drone by Parrot.

The Parrot Bebop 2 is an outstanding entry drone for any person who may want to experience aerial-photography and video recording using a state of the art FPV kit. The designers, Parrot, have cut the cost by allowing the users to use their smartphone as a drone controller, thereby making the Bebop 2 highly affordable. Nonetheless, for the ultimate Parrot experience, users are highly encouraged to purchase the FPV bundle that gives the chance of experiencing a first-person viewpoint. The Bebop 2 also comes with a one-year warranty as well as a 5-day return policy, if the drone is purchased from the manufacturers directly. Purchases made from retailers may differ. If you are looking for a drone that is not, only affordable, but also offers a one-of-a-kind drone experience, then the Parrot Bebop 2 is a must-have.

Yuneec Breeze: The Flying Selfie-Stick and A Drone of the future